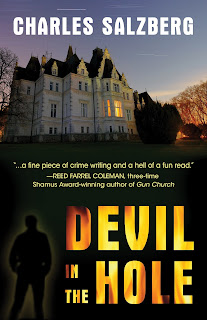 Summary of Devil in the Hole:

Devil in the Hole is based on a true crime that occurred over 40 years ago in New Jersey, wherein a man murdered his entire family, wife, three children, mother and the family dog, and disappeared. My novel uses that event and takes off from there, following the murderer on his escape route. Using the voices of people he meets along the way, and people who are affected by his crime, the reader starts to build a portrait of the man and why he did what he did, in addition to following those who are searching for him.

My review of Devil in the Hole:

I am quite familiar with this story (although it’s not a true account), as I live in Philadelphia. So, the “believability” factor was certainly not a problem for me. Devil in the Hole is a quick read…partially because of its format (short, easy-to-read chapters that are told from a different person’s perspective), its fast pace, and its compelling storytelling.

I read this book in one night — albeit, it was a late night — because I simply could not put it down. It’s that compelling. And that gripping. Salzberg has a way of seamlessly flowing from one voice to the next (not an easy task, either) and does so realistically and believably. I find myself staying up late to read on more occasions than I’d like to admit…but to not put a book down until it’s finished? That’s saying something about Devil in the Hole.

If you’re a fan of crime stories, suspense, thrillers, whodunnits, or anything along those lines, you will enjoy this book. I have not a single complaint or criticism; it’s simply that good. Unimpeachable, actually. Devil in the Hole is one of those books that can (and likely will) put its author on your radar for future reading material. I know it did for me.

Read an excerpt of Devil in the Hole:

About the author of Devil in the Hole:

Charles Salzberg is a freelance writer whose work has appeared in Esquire, New York magazine, Elle, Good Housekeeping, The New York Times Book Review, The New York Times, GQ and other periodicals. He is the author of more than 20 non-fiction books and several novels, including Swann’s Last Song, which was nominated for a Shamus Award for Best First PI Novel, and the sequel, Swann Dives In. Salzberg also has taught been a visiting professor of Magazine at the S.I. Newhouse School of Public Communications, and taught writing at Sarah Lawrence College, the Writer’s Voice, and the New York Writers Workshop, of which he is a founding member.

You can keep up with Charles Salzberg here: