I’ve already listed my Favorite Christmas Movies so, of course here comes the list of holiday movies I can’t stand. There is really no need to number this list, is there? I mean, these movies are all pretty bad — it would just be an exercise in futility to try to rate them on level of crappiness. So, let’s take a peek at my list of the Worst Christmas Movies, shall we? 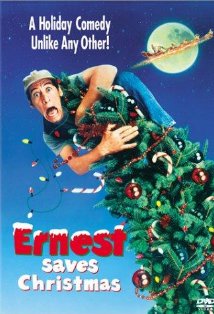 Ernest is ridiculous. I was 18 when this movie came out and for the life of me, could not understand why Ernest was popular. What garbage.

Stupid premise, annoying kid, just yuck all the way around. Look, sometimes a movie franchise can’t go on forever. Come up with a new idea and move on.

I never “dug” this movie because I thought the premise was a little creepy and depressing. It didn’t help that the movie simply was not good. Period. It definitely tried really hard, though, and it showed. 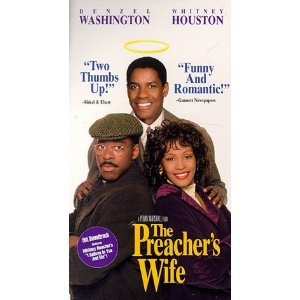 The Bishop’s Wife should never — never ever ever — be remade. And certainly not with Whitney Houston (double ugh…not to speak ill of the dead and all, but an actress she was not) and some unknown actor (to me, anyway) as the “preacher.” Hate. This. Movie. How it got two thumbs up from the critics is beyond me, considering I list it as one of the worst Christmas movies of all time. What the heck.

The first installment of this trifecta was actually on my list of favorites…but, boy, did they drop the ball with the sequels. They’re not even watchable, in my opinion.

Surviving Christmas? I could barely survive this movie! (ba-dum-tss) This was hard to watch, but I stuck it out, unfortunately. I didn’t think it was possible for Ben Affleck to be any more annoying than he already was, but what do ya know? He was!

So, that’s something, I suppose. I’m not even sure James Gandolfini “acted” in this movie…as you can see in the picture, he is reacting just as I wanted to. Maybe Affleck annoyed him as well. It felt like the actors never committed to the movie, as though they knew how much it stunk while they were filming it.

Christmas With the Kranks

Wow. That was awful. Sadly, this was the movie version of a great John Grisham book, Skipping Christmas.  It doesn’t even come close. I don’t know how you can convert such a good Christmas books into one of the worst Christmas movies, but they did! Just don’t waste your time, trust me. Read the book.

Wow. It’s hard to believe the drek that can be slopped together for the sake of trying to make a buck. I actually watched this all the way through, just to see a) how bad it could get and b) how they could possibly resolve it to a conclusion. It a) kept getting worse and b) just basically ended. Horrible. Simply horrible.

Jingle All The Way

Oof. Another dog. This. Movie. Stinks. And don’t get me started on the ending…how Arnold turns into…don’t make me say it. Just don’t. It makes me want to stab my eyes out.

So, what about you? What would be on your list of worst Christmas movies?